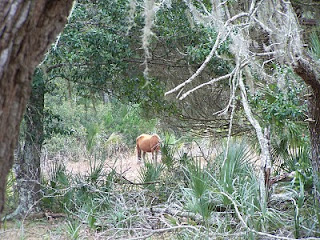 Last week, my daughter Kimberly and I boarded the ferry in St. Marys, Georgia, for a 45 minute ride to Cumberland Island. I had 2 goals to accomplish on this trip. First, I wanted to see some of the 150 or so feral horses that live on the island. Second, there was a cemetery located on the southern portion of the island I wanted to visit.

Just a short distance from the dock, we saw the first horse. Unfortunately this was the only horse we saw during our 4 hour visit. 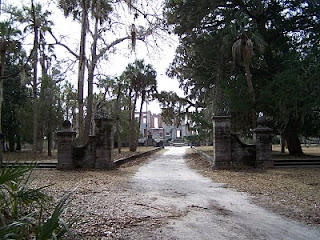 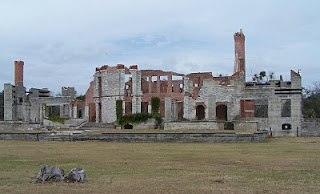 A short distance from the Dungeness Ruins, I saw a wooden sign pointing to the direction of the cemetery. The Greene-Miller Cemetery is probably one of the smallest cemeteries I have ever visited. 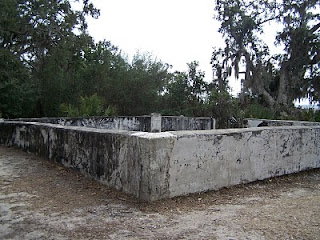 I found a stone for a Charles Jackson. The inscription stated he was born in Newton, Massechusetts (sic) 23 April 1767. He was educated at Harvard College and was a Commissioned Officer in the American Revolutionary War. And for several years was a Counsellor at Law who died on the 25th Oct 1801 at the Mansion of Phineas Miller EsqR Cumberland Island. 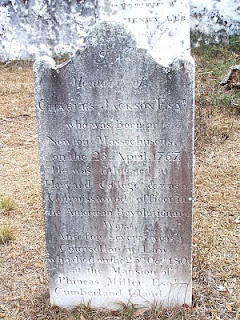 Hmm, born in 1767 and a commissioned officer in the Revolutionary War. Even if he participated in the war toward the end, I thought he still was a little too young to be an officer. A little research needed to be done.

Charles Jackson was the fifth son of Michael and Ruth (Parker) Jackson. He was a fifer in Captain John Wiley’s Company(at age 10). Like his brothers, he served in his father’s regiment from 1777-1783 (8th Regiment, Massachusetts Line). He was commissioned as an ensign on 4 February 1783.

After the Revolutionary War, Charles served as the U.S. District Attorney for Georgia from 1797 until his death in 1801.

The Massachusetts Historical Society has 3 cartons of the Jackson family papers. Carton 2 contains information about Charles, mostly concerning his service as the District Attorney. He supposedly had a lengthy obituary published in The Columbian Centennial. I will have to obtain a copy of it as I am curious about his cause of death.

General Henry “Light Horse Harry” Lee also died on Cumberland Island and was originally buried in the Greene-Miller Cemetery, but that is another story.